Still plugging along. Providence still has not canceled/suspended their marathon which increasingly looks highly likely to happen, but with not a ton else to do, and a strong desire to get out of the house, training continues unabated. Good cardio this week, doing my usual runs and then mixing in some easy hikes with family, 6 out of the past 8 days.

Shout out to my fellow brother in arms in this challenge, Mark D. who also continues to crush it! Let's just hope we are able to actually run a marathon on May 3!

Providence Marathon has still not been canceled/postponed, but 7 weeks out, I figure it is only a matter of days before they will make some sort of decision. Until then, I continue to plow on. Did 17 miles yesterday. Definitely one of my worst runs, just never really into it. Not sure why; it was a beautiful, sunny day. Mapped out a route to meet the family exactly 17 miles away right along the trail at a restaurant. Had gels and water at the ready which I had not yet done on this training. Was sub-9 for the run, but just wasn't my A-game. Anyway, as we learned, there are going to be some stinkers in there, and yesterday was one of them.

The blogging and diet continue to be a work in progress, but the running has really come on of late, cold weather is definitely helping. Over the weekend, ran a sub 1:50 half which is just 4 minutes off my PB and I still had a lot of gas in the tank at the end of the run, so thrilled about that. Yesterday, ran a sub 8min/mile pace over 5 miles which hasn't happened in a very long time, so another positive run. Now if only I could do as well with the blogging....

All good, some really "nice" days in CT this past week (45-55F), so took advantage and was out running 6x, making up for some past and future running misses. Otherwise, all is on track!

Continuing to chug along. Had a nice run yesterday where I was playing around with my stride length, huge differences, question about whether I can sustain it for 26 miles, but will continue to experiment in the coming days.

Still so damn cold. I do everything I can to run outdoors as I just loathe the treadmill. Crisp days of late, no precipitation, so that has been good. Just hit up REI for some clothing upgrades including a pair of running gloves. Weekly picture is from this past weekend when it was 4 degrees out.

Not much new to report:

- Running continues largely unscathed although a little behind. This just in - THE WEATHER IN FEBRUARY IN NEW ENGLAND SUCKS! Who knew?
- Diet far from 100%, but improving this month, I swear. Breakfasts have been immaculate, dinners with adult beverages, not so much, so, let's call this a work in progress.
- My blogging sucks. It's going to be once a week, this is just the new reality.

Largely on track, keep having to move runs around due to weather and schedule, but still on track.

Week 2 now in the books. Diet has been hit or miss, and I have missed a couple of the non-running workouts. 1 day we went skiing and I was asleep by 8:30 and another day was just too exhausted. My goal is to hit all of the running workouts which I have done thus far and best efforts on the non-running days. Diet has been hit and miss, need to tighten that up this coming week, starts with just getting the diet printed out and on my fridge. Blogging has been poor, room for improvement there!

Was trying to figure out what my marathon time was in Hong Kong from January 2015 (I think it was 4:26 but cannot confirm) and came across my facebook entry from the day. Attaching below. Brought back some fun memories, a little disappointed it took me 5 years to give it another go, but here we are. Also sad to see that they have canceled the HK marathon this year because of the coronavirus.

Here is a picture of the HK Marathon finish line and the winner, Ethiopia’s Ejigu Sentayehu Merga. If you squint your eyes, and look far into the background, you can see me in the yellow shirt (a mere 13 miles and over 2 hours behind him).

So I survived, leg cramps hit me at mile 16, but was able to finish the race, so pleased overall, although I wish I could have given my nemesis Ejigu a better run for his money.

Some observations from my first, and very likely only, marathon. Some of this might be the norms for marathons, I have no point of reference, so apologies in advance for my ramblings:

- HK is a beautiful course, we ran across 3 very beautiful bridges with terrific views certainly helped by it being a nice windy day with minimal pollution.

- I’m all for selfies, not a big proponent myself, but to each their own. I am not a big fan of them in the middle of marathons. I ran over some dude running directly in front of me who abruptly stopped at the 10k marker and I completely Gronked him. Despite repeated requests by the organizers to not take selfies, everyone was doing it. It was agonizingly annoying as people would constantly stop to take a selfie, some even with selfie sticks!!!

- A lot of people walked in the marathon. Injured, need a breather, munching on a banana…many reasons for walking, I get it, but it’s really tough when you have a bunch of walkers on a one lane road and you have to constantly zig-zag to avoid them. My personal favorite was a woman who had clearly mailed it in and was actually watching a movie/tv show on her Samsung device. At least she was walking on the side, but watching TV, really?!?!

- I was shocked at how many visually impaired runners were in the race. Usually they were passing me with their guide and it was truly inspirational to see these men and women whizz by me, constantly gave me an extra burst of energy.

- Despite the relatively pollution-free day in Hong Kong yesterday, I was not completely absolved of pollution. At about the 22-mile mark, we have to go through the Western Tunnel to get onto Hong Kong island. It was pure hell. The only way I can describe running through that tunnel is that it was like being an asthmatic, running through a coal mine, trying to escape a gasoline fire. It was not a ton of fun, especially at that point in the race.

- Organization was impressive, which I guess it would have to be with 70,000+ runners, it was all very orderly, particularly at the end, where they dispersed the runners and supporters in a very smart manner.

- Having grown up watching and cheering at many NYC marathons during my youth, I was disappointed to see that there were very few similarities between the two marathons. First, for the vast majority of the race, it was a single lane that all of the runners had to go through which was exasperating for a whole ton of reasons. Second, the crowds were non-existent. The last mile had a few thousand people, but it was minuscule to what I have experienced in NYC and seen highlights of in London, Berlin, Boston, etc. That was a big disappointment.

Overall, fantastic experience, great training, glad I finished, Don't think I will ever do it again.

Screw that, see you next year Ejigu...

Well done to Mark D. for correctly getting that my marathon will indeed be in the great state of Rhode Island in Providence (hints in order were: 1 - Cheezy show from the early naughts called Providence, 2 - skyline, and 3 - eye of Providence). I chose Providence because it was nearby (~2 hours from me) and was one of the early marathons this year in the general vicinity. Not a well known marathon by any stretch, and in researching the marathon, as best I can tell, many people only do it so they can claim to have done 50 marathons in 50 states (not something I aspire to do).

Lesson from today was on goals, and my primary marathon goal is to break 4 hours. I did the HK Marathon ~5 years ago and was on pace to break 4:00 before cramps and a tunnel did me in. Hopefully I can correct those short comings in Providence.

Appreciate the gradual lead in to the Marathon program. Pulled out the Kenzai bands yesterday for the first time in a looooooooong time. And as usual, very sore the next day. Free run today.

And we are off on the Kenzai Marathon 111-day program. Been doing some light running over the past couple of weeks, but now getting serious. Day 1 is in the books, light run for the first of the program, did all the stretches which is something I NEVER do, but one of my aims of this program is to try and nail pre and post run stretches. Whole lotta wear and tear on these tires, want to keep them functioning for the next 16 weeks....

Race day is on May 3, can you guess where my race is? Hints in attached pictures... 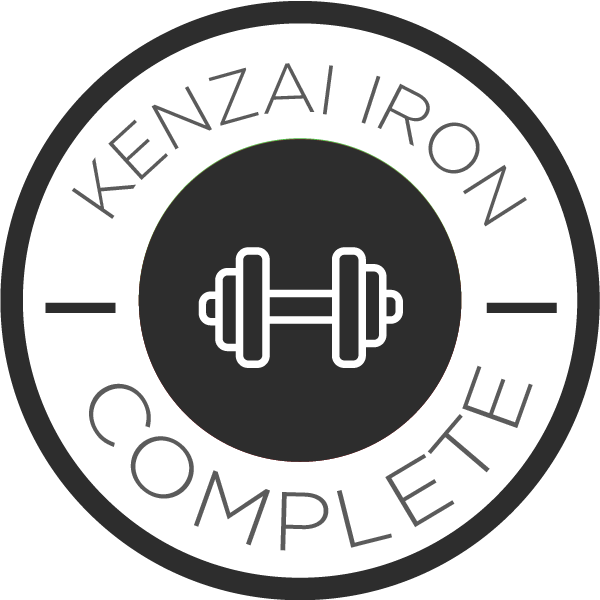 Not nearly as good as the first time, I crushed it the first month, but then a ton of slacking off the past few weeks.

The program is absolutely fantastic and I feel bad for not giving it my all as well as being a lousy teammate. To 2020 we head and my first resolution will be to make amends in my next program!

Happy Holidays Kenzaites, see you in the new year!

Nothing like plopping Thanksgiving right into the final 10 days of the program! Last month has not been on point, will likely need to give this program another go in 2020.

This program is flying by and I am sadly not nearly as invested in it as I should be! Blogging has been an epic fail, workouts problematic, only positive has been I have been ok with the diet. Transition back to Americana has kept me more busy than I expected; the tons of free time I had anticipated has failed to materialize, trying to start things back up this week. Onwards and upwards!

Tough week, lots going on. I continue to fall down on the blogs, usual refrain of too much else going on which even after 5+ years of Kenzai is still a lousy excuse...

Diet continues to be OK, solid B, but workouts have been poor. Off to the gym to rectify that now!

As expected, last weekend was a complete miss and a 48 hour long indulgence. I knew it was coming, but I couldn't post anything here since it was in fact a surprise celebration of my mother's X0th birthday (aka @Susan B) and I know she reads my blog! She was totally caught off guard, a complete surprise, we got her to our house under the guise of celebrating my 10-year old's birthday. With 30+ in attendance in our backyard, I think she was blown away. All of my brother's flew in (with family) and we had 11 people staying in our house on Saturday night. Cutting up vegetables was not near the top of the list of things to do.

Anyway, since Monday, been largely back on the straight and narrow. A- on the diet, B on workouts, F on the blogs. Missed a couple of the cardios in favor of continuing to get our house sorted and I have been a complete no show on the blogs. Hope to do a thorough catch-up this weekend.

Hope all are well!